Fine 5 Dance Theatre is one of the best-known and the most influential independent contemporary dance companies in Estonia. 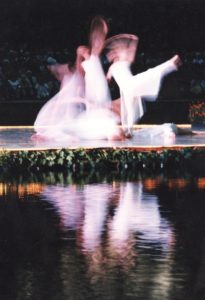 This non-profit organisation was founded in 1992 when five dancers Anu Ruusmaa, Katrin Laur, Tiina Ollesk, Oleg Ostanin and René Nõmmik formed their own troupe. In early 90-ies their work was influenced by traditional modern dance techniques, but since the end of 90-ies the working methods have remarkably changed, combining various new approaches to human movement, somatic principles and different strategies, ideologies and practices. Since 1997, the key figures of theatre are Rene Nõmmik and Tiina Ollesk.

Over the years Fine5 have produced more than 60 productions and created their own statement in movement language. Tiina and Rene have won several contemporary choreography prizes at Vitebsk IFMC (1992, 1993, 1996, 1999, 2001, 2003, 2007, 2010), their works have been nominated 8 times as best contemporary dance production in Estonia and in 2009 and 2015 they became laureates of the Theatre Union Prize for the Best Dance Production.  Highlights from Estonian cultural life: in 2005-2012 has company participated at Birgitta Festival in Tallinn performing their own production of C.Orff`s “Carmina burana” for 5 years and G.Verdi`s “Requiem” for 2 years; in 2018 in the frame of Estonia100 was created co-operation production with Rakvere Theatre "To touch the Moon".

Fine5 DT creates works for bigger and smaller stages, experiments with different site-specific and environmental ideas and collaborates nationally and internationally with scientists and multidisciplinary artists. As dance artist they navigate through research of individual movement approach and current understandings of choreography as art form, somatic body-statement and dig deep to investigate how movement research generally is valuable in current world. Theatre´s statement is sustainable art and positive creative activity – ecofriendly approach in arts, lifelong learning in dance, care and sharing in dance community. 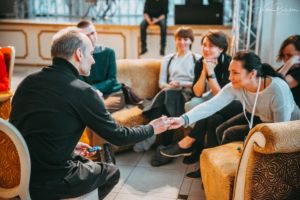 Producing and performing both nationally and internationally. Educational programs and performances.

What we are doing