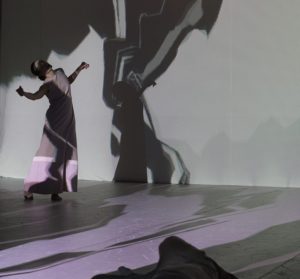 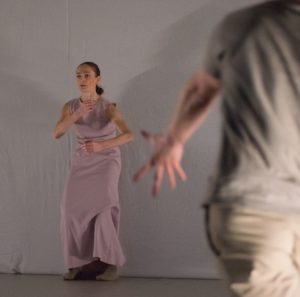 “Trisolde” is a symbiotic dance performance inspired by R.Wagner´s opera “Tristan and Isolde”. It is about vibrant relationships between man and woman, confrontational feelings and passion. This work combines interactive technology, audiovisual images and contemporary choreography. Dancers are partly controlling the music via body movements and some voluntarily selected audience members will influence the real-time sound with their psychophysiological reactions via sensors. This work brings together many exciting fields of art and research from computational creativity to physiological computing: to use the audience's reactions to module the sound orchestra is new way of doing "participatory theatre". Interactive technology support for „Trisolde“ comes from TLU DTI Associate Professor in physiological computing  Aleksnder Väljamäe and Senior Research Fellow Ilkka Kosunen.
“Tristan and Isolde” is widely considered both as one of the greatest operas of all time as well as beginning of modernism in music, introducing techniques such as chromaticism dissonance and even atonality. It has sometimes been described as a “symphony with words”; the opera lacks major stage action, large choruses or wide range of characters. Most of the “action” of the opera happens inside of the heads of Tristan and Isolde. This provides amazing possibilities for creating a biocybernetic system for the dance performance: in this case, Tristan and Isolde will communicate both explicitly (through movement of the dancers) but also implicitly via the measured psychophysiological signals.

28.03.2019, Danzumees "The atmosphere filled with electricity and the atmosphere that could have been cut with a knife. Stage 2 people - man and woman. There is a line between the two, neither of which can be over and over. I was so fascinated by Tiina Ollesk that I couldn't get my eyes out of her for a long time. What kind of grace, poetry, and emotions that appear not only on the face, but above all on the posture, the movements, making it sober, cognitive. And these emotions keep the viewer tense and the eyes of the dancer. There's a French lady at one point, the next Spanish flamotanist, and then a Greek goddess ... wonderful! The quintessence of a woman's being - there are several different hides in every woman - depends on who she is in what situation and to whom she looks or wants to look. I only started looking at the man after a while. When this line between the man and the woman began to warp, bend ... as ambiguous ... The music that was created by these sensors was on base music and honestly, it didn't bother me thanks to dancers and all this staged game with light and video, otherwise such "noise" might become more annoying. However, apparently, although the nature of the sound remains unchanged, for its part, it created a certain amount of tension in the atmosphere. Simo Kruusement, the man in the production, gave a bit more of his energy in the first half. In his more technical moments, he was powerful, although he was always in control of the whole game. The man may have been more energetic at times, dancing more than a woman. But the woman was deeper, more specific, more thoughtful. As someone would have said, but remembered the idea that we men can be and feel like "men" but only by the grace of a woman. As soon as you start to push yourself, the woman senses it and the thing is broken. Or, if you keep yourself away, there will be no tension between male and female energy. A woman cannot overwhelm the line between a man and a woman. The woman must reach out and the man must seriously want this hand to reach one side of the line. In any case, the boundary in the story is overcome, and so it disappears from the game, as if it had never been. Next comes the collusion and cripple that culminates in the death of the man and the fury of the woman. IT'S RAEV! Take care of God for that. That woman literally explodes on stage there. Tiina, who would grow up like all this darkness - fabulous shapes! It seemed as if the whole audience was shocked at the moment, because they were hearing the hustle and bustle, and people around me started filming with the phones - in the theater! But it didn't bother me because I was inside this. It was just fabulous!"

This performance is supported by: The Cultural Endowment of Estonia, Tallinn University, Tallinn City Government.

View all posts by: