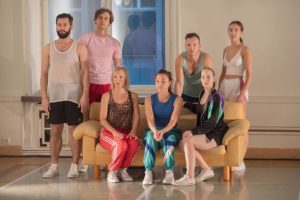 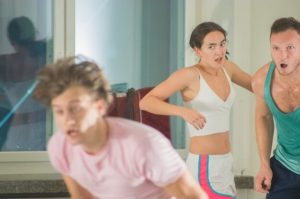 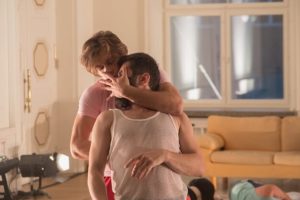 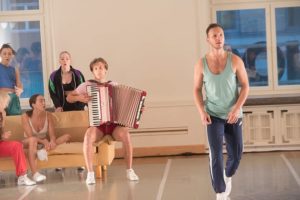 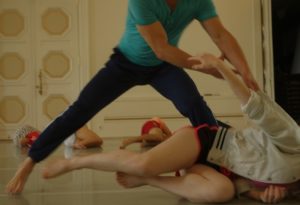 "Generations" is Fine5 Dance Theater co-operation project with Israeli artists Stav Marin and Neta Weiner.  In “Generations” they deal with the clash and meeting of spoken word and body language. Through this clash both political structures and intimate relations are investigated and researched. The collaboration work between Stav, Neta and the Fine5 dancers deals with the weight of memory as it is transferred through generations within the structure of families. It examines the ability to remember and forget and raises questions of whether we can have a choice. Several textual and physical practices (martial arts, pop music, folk traditions) are brought into the piece as means of confrontation and affirmation. By exposing realms of violence and softness within the family texture, personal and collective narratives are revealed to be broken down and recomposed again.

"Generations" brings together dancers from different Fine5 company generations. Some performers started their dance career around the time when Estonia got its independence in 1991 and some of these dancers just graduated this year.

10.10.2018, Auburn Scallon "Ballets like Swan Lake are famous for a grand finale of never ending pirouettes performed by a spinning soloist. Generations puts an athletic twist on that concept, with a determined dancer seemingly obligated to repeat an endless number of back walkovers (I lost count after 35) until she is finally released by the support of another partner. The final poses of represent a fitting array of familial relationships, with a one couple intimately embracing, a trio sprawled comfortably across each other on the floor, and one stone-faced couple sitting tensely on the sofa, neither touching or interacting with each other. Generations and families come in all different shapes and sizes and this performance captures that essence brilliantly." Read more about: Auburn Scallon about Fine5 Dance Theatre’s ‘Generations’

Stav Marin is Israeli choreographer and dancer. She graduated Circomedia drama school for circus performers for physical actors in Bristol, United Kingdom, Gaaton Dance Academy, and Habustan Arts School. Participated as a dancer, actress, and creator in dozens of dance and theater works that took place in various festivals in Israel and around the world. In 2015 Stav created the spoken-dance solo piece "May I- Just a Question" for the Intima Dance Festival, which received enthusiastic reviews. Her work "Come Closer" was debuted in Curtain Up Festival 2016. The work was highly praised and chosen to represent the festival in the Ministry of Foreign Affairs's "International Exposure" events and in Stockholm Fringe Festival and Diversia Festival in Russia. In 2016 she created the dance theater performance "Cut. Loose" with her partner Neta Weiner for the Acco Theatre Festival. The work was awarded the Israel Festival prize and The "Stage Language" prize winner, Israeli fringe awards, 2017. Choreographer and producer of "Ezlenu Behatzer", debuted in Israel Museum as part of "Between Heaven and Earth" Festival 2017.

Neta Weiner is Israeli actor, poet and musician. He graduated Muzik, School of Creation and Production. He is a founding member of System Ali - a multi-lingual Hip-Hop ensemble comprised of 9 musicians performing in Hebrew, Arabic, Russian and English. Art Director of Beit System Ali Community Education and Cultural Center in Hulon. A participant, writer and performer of several prize-winning Spoken-Word performances, that took place in festivals and theatres around the world. Leading actor in The Pillowman, production of Haifa Theater, 2017. Practitioner of Martial Arts, a Wing Tsun Kung Fu qualified teacher. Solo writer and performer of Biz'hut Hashiva, highly praised debüüt album, 2016. 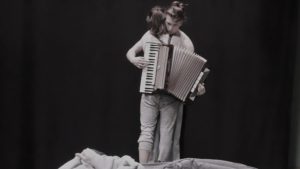